The weather gods smiled on us today. As in past days the air was cool, however it was overcast and the wind was blowing from the west. Since we were heading east, then that was fantastic! The mileage on the route slip was stated to be 107 miles 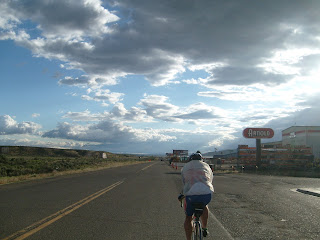 As we started, the sun was peeking through the clouds sending rays of sun through the early morning light. With the hugh tailwind, the wind speed must have been 25MPH, there wasn't a need for a large pack of rides to provide a wind break. However, Alan, Fred and myself traveled together, rotating the lead position as we again jumped onto I-80.

The time to the first break stop pasted quickly ending with a climb to a summit. We stopped to grab some snacks, but the route sheet showed that there might be coffee in 8 miles. We pulled off I-80 and found an Burger King. Not exactly what we had desired, but better than nothing. More riders piled into after us and soon the place was filled with folks odering burgers.. There wasn't going to be anywhere to get additional meals until we reached our destination. It was only 9:30 in the morning and folks were ordering lunch! 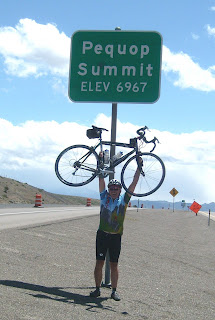 The next breakstop was at the 70 mile point, the the top of another pass. At the top we were again above the altitude of Lake Tahoe. It seems like weeks ago since we were climbing up to Truckee.

During the final third of the ride we took advantage of the down hill and the tail wind to boost the average speed of the ride above 20MPH. On a typical ride, 15 to 17 MPH is pretty good, but we finished today at a average spped of 20.9MPH and 109 Miles!!! It's unlikely that I will ever find that same set of conditions to exceed this distance and speed!!

Click for all of the daily posts
Posted by Brian Cox at 3:14 PM