The theme for today was "Tailwinds Ho!". 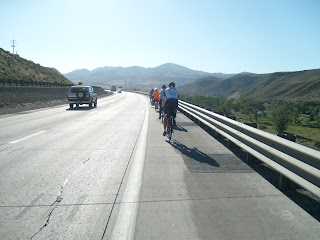 The landscape is beginning to change, from the green mountains of California to the brown dry hills of Nevada. Three miles into the ride we got on to the I-80 heading East. From now until Salt Lake City we will be on the Interstate more often than not. As we entered the interstate we were traveling the same direction as the wind, which was very good because the wind was pretty strong. Several times I was traveling at 25+ miles per hour, a very nice clip indeed.

Perhaps I've failed to mention in my previous post, but America By Bicycle (abbike.com) sets up rest stops along the routes each day. The rest stops has water and snacks to help us through the ride. Today the first rest stop was at 33 miles into the ride. The landscape is getting pretty sparse as the ride goes on. Between the first rest stop and the second rest stop, there is nothing in the way of any highway services. No water, no food, no rest rooms. The second rest stop was located at 66 miles. A bit over 2/3 of today's ride is complete.

Earlier I had spoke about the tail winds. Well as the road twisted and the winds shifted during the day, several times we found ourselves heading into the wind and sometimes uphill. Not a good situation. It makes the day longer and tires you out faster.

We came rolling into town pretty early even with the 90 plus miles we put in. 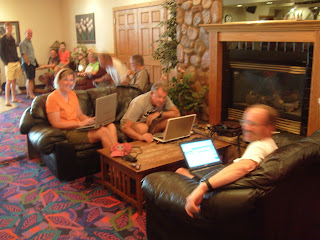 The motel has wireless, but only in the lobby. It turns out that many folks on the trip are keeping online trip logs similar to this one. Since the lobby is the only place to get a connection, we were all typing away on any surface that we could find. Now this never happened we I first stared keeping travel logs on line in 2002!!